Bright and upbeat are the two words that spring to mind when first encountering the NextGen Gaming slot title Foxin’ Wins. This five-reeler revolves around the free-spending adventures of the mega-rich Mr Fox, with the reels encased in an ornate gold frame against the backdrop of Mr Fox’s luxuriously appointed living room. It also includes NextGen’s Super Bet function, which can enhance wins significantly in return for an extra wager.

The design has elements of a cheerful 3D cartoon, accompanied by upbeat cartoony music to enhance this impression, along with animated celebrations of wins that increase as the prizes do. The Foxin’ Wins game controls are contained within some of the upmarket furnishings scattered below the reels. There are 25 pay lines, and bets per line can be adjusted to a number of levels between 1 and 200 credits.

In keeping with Foxin’ Wins’ positive and upbeat atmosphere, the symbols are all bold and clear, even with some intricate detail included in the higher-value icons, and the game uses bright, cheery colours throughout.

The six poker icons come in pairs of matching value, with the 9 and 10, J and Q, and K and A rendered as free-standing golden symbols, each enamelled with a different coloured lacquer face. Decoration on the A and K extends to piles of gold coins alongside them, and both the K and A will win 200 credits for five matches on one pay line.

Foxin’ Wins has four higher-value icons, starting with another pair matched in value: the roll of dollar bills and the ornate fountain featuring a neo-classical statue of Mr Fox. These symbols each win 20, 100 or 250 credits for three, four or five of a kind. Mr Fox’s huge mansion and Mrs Fox driving her scarlet Rolls Royce are the top-paying ordinary icons, needing only two or more matches to score prizes. For five of a kind, they pay 500 and 1,000 credits, respectively. 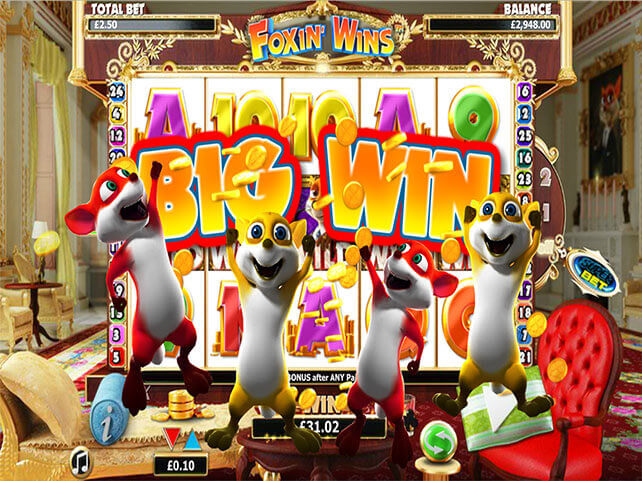 Mr Fox Icon is the Wild

Mr Fox himself, in the same dapper portrait that hangs in his living room, serves as the Foxin’ Wins Wild. It can replace any of the 10 ordinary symbols to complete winning combinations, but it also wins prizes for consecutive Wild combinations from Reel 1 on the same pay line.

Two Wilds on a Foxin’ Wins pay line win 10 credits, and three matching Wilds win 200. Four matches will score a prize of 500 credits, with 2,000 credits as the prize for five Wilds on one line. There are also bonus fox pups hidden within the reels, which can appear at random after any spin to turn more symbols into Wilds.

The big money-spinner in Foxin’ Wins is the Scatter symbol, a pot of gold. It would be more accurate to describe it as a golden cauldron filled with gold coins, and two or more in any location on the reels pay an immediate prize based on a multiplier of the total bet per spin. For two, three, four or five Scatters, this multiplier is 1X, 5X, 15X or 100X.

The player also needs three or more Scatters to trigger 10 free spins, during which more than the usual number of fox cubs appear, and wins are also doubled. Two more bonus games with extra prizes, Fox Funds and Leprechaun Shakedown at https://onlinecasinobc.net/review/spin-casino/, can be triggered randomly after any spin to give the player even more shots at winning.