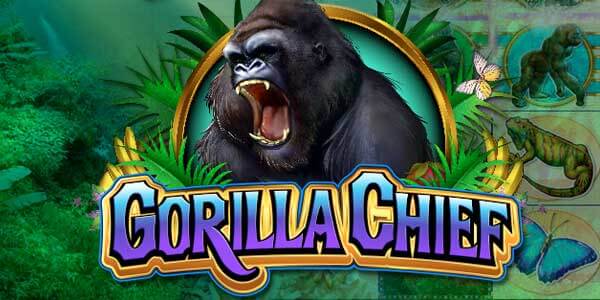 Although the tropical jungle backdrop used in the Williams Interactive slot title Gorilla Chief 2 is darker and gloomier than many slots with wildlife themes, online casino regulars will enjoy the Hot Hot Super Respin feature, which gives the player 2 free respins whenever the same symbol fills Reel 1. This feature also explains the flames surrounding the reels and the cheerful fire burning atop them, as well as the intense fiery effects in the bonus round, which are otherwise quite incongruous.

Cheerful, relaxing African marimba music accompanies the action, taking on more urgent drumming vibes during the bonus rounds. Gorilla Chief 2 has five reels, each showing four icons apiece. There are 50 paylines, but each line bet is split over two paylines. The bet/2 lines can be adjusted to any amount between 0.01 and 5.00, for a basic bet of 0.25 to 125.00 per spin. However the feature bet, like the fixed paylines, is compulsory on each spin, as it engages the Hot Hot Re-spins feature. This additional bet ranges from 0.15 to 75.00, depending on the base bet, so total bets per spin vary between 0.40 and 200.00.

As dark as the backdrop might be, the symbols on the reels are drawn in bright, clear graphics in multiple hues against a light green background. Gorilla Chief 2 is also one of those slots that sticks to its theme throughout; there are no poker playing cards or online bingo in this jungle. There are 10 payline symbols in total: in order of increasing value, they are a spray of mangos, a bold tropical bloom, a hand of bananas, a brilliant blue butterfly, a multi-coloured bird, an iguana, a pair of rainbow-hued parrots, a leopard, a baby gorilla, and an adult gorilla.

All Gorilla Chief 2 payline symbols must make three matches or more on one line, from Reel 1, to win prizes. The symbols are grouped in sets with similar prize values. For five of a kind, the mangos, flower and bananas win 100 credits, while the butterfly, bird, iguana, parrots, leopard and both gorillas win 150. So there isn’t a huge increase in wins for the higher-value symbols, which is what makes the bonus rounds so important.

Appropriately enough, the Gorilla Chief 2 Wild symbol is a close-up of a glowering alpha silverback’s face. He can appear only on Reels 2, 3, 4, or 5, so there are no prizes on the pay table for payline combos involving a run of matching Wilds.

Thus the Wild’s only function is as a substitute, and it can create extra winning lines by replacing any payline symbol in a combo.

Bonus Round on New Reels

The Gorilla Chief 2 Scatter is a breath-taking view of a fiery golden sunset over the forest, and three in any position trigger a bonus round of 10 free spins. Additional Wilds added to the reels boost the wins to make this Gorilla Chief 2’s most lucrative phase.

The free spins play out on reels reconfigured in an X shape, with between three and four windows per reel. A new Wild icon of dense forest leaves is introduced; whenever it appears, at the end of the spin all these icons will turn into the same symbol already present on the reels, making multiple wins at once a possibility. Free spins can be retriggered.